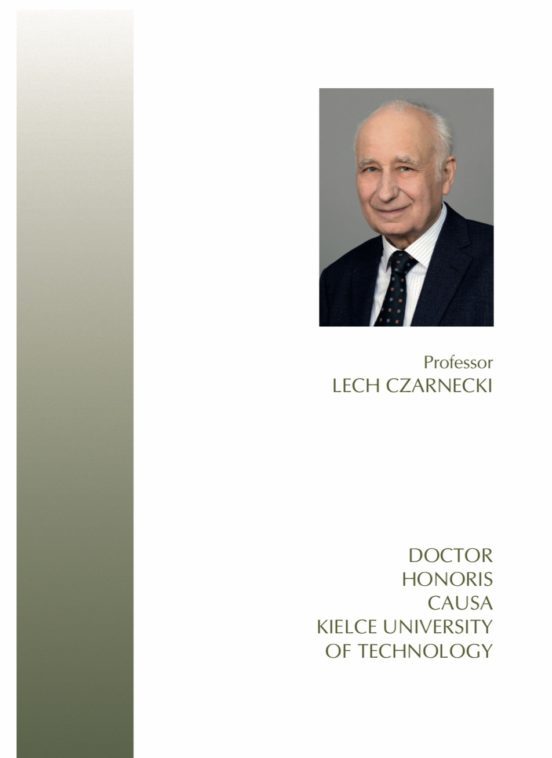 Professor of technical sciences,  Lech Czarnecki – an outstanding scientist in the discipline of civil engineering and transport, an excellent specialist in the field of engineering of building materials; durability, repairs and building protection and sustainable construction, a dedicated academic teacher, member of many scientific organizations in Poland and around the world.

Professor Lech Czarnecki obtained his master’s degree in engineering at the Faculty of Chemistry of the Warsaw University of Technology in 1965, and his area of expertise was plastic technology. In the same year he started working as the Senior Technologist for the Warsaw Plastics Factory. Very soon, in 1969 his extremely successful and fruitful scientific career was initiated when he was employed at the Faculty of Civil Engineering of the Warsaw University of Technology. And then, in 1973 Professor Lech Czarnecki was awarded the degree of Doctor of Technical Sciences in the field of plastics processing technology, in 1983 – after submitting the dissertation titled „Resin concrete” – he was granted the post-doctoral degree, and in 1996 he was conferred the academic title of professor.

As an academician at the Warsaw University of Technology, the Professor went through all levels of his scientific career, simultaneously holding various functions. He was the Head of the Institute (1981-1991 and 1993-2006) and then of the Department of Building Materials Engineering (2006-2011) at the Faculty Civil Engineering, a member of the Senate of the Warsaw University of Technology (1993-2004), Chairman of the Senate Committee on International Relations and on Professional Ethics, Vice-Rector for Studies (2003-2005). Since 2009, Professor Lech Czarnecki has been fulfilling the duty of the scientific secretary at the  Institute of Building Technology in Warsaw.

Professor Czarnecki’s scientific activities, initially related to building chemistry, gradually evolved into his main research stream: building material engineering: construction polymer composites, including polymer concrete, and durability of buildings and materials for repairing concrete structures. Professor’s fascination with science and his ability to synthesize  the knowledge and technology has contributed significantly to the  development of civil engineering. One of his remarkable achievements is the systematic knowledge organization in the field of building materials engineering.

Professor Lech Czarnecki’s intense scientific and research activities are proved and justified by his numerous papers published at the national and international conferences. He is the author and co-author of more than 250 publications, the scope of which can be confirmed by over 2700 citations. Professor’s research papers have been printed in the most renowned prestigious journals: ACI Materials Journal; Applied Science; Advanced Journal of Applied Polymer Science; Bulletin of the Polish of Academy of Sciences: Technical Sciences; Cement and Concrete Composites; Concrete International; Materials Research; Materials and Structure. Professor is the author and co-author of 11 books published in the span of 1982-2017.

Concurrently with the scientific activity, Professor has been engaged in the engineering works what resulted in over 100 outstanding expert evaluations and analysis for the industry. Moreover, he is the co-author of 38 patented inventions, among them one patented in 9 countries.

Professor Czarnecki has been frequently invited to participate in the works of Scientific Committees of many national and international Conferences and to fulfil the duties of general reporter. He actively cooperates with foreign scientists and organizations. He gives lectures regularly at the most reputable worldwide universities, in Belgium, Israel, Japan, South Korea, Germany, Sweden or USA.

Professor has performed various honourable roles in scientific organizations and technical associations. He has been a member of the Committee on Civil Engineering and Hydroengineering of the Polish Academy of Sciences (since 1993), Vice-President of the Scientific Council of the Institute of Building Technology (since 1995), a member of the Scientific Council of the Road and Bridge Research Institute (since 2002). He is a senior member at RILEM (the International Union of Laboratories and Experts in Construction Materials, Systems and Structures), and since 1992 a member of the Directory Board at the International Congress on Polymers in Concrete (ICPIC) – he was the president of this organization in the years 2006-2011. He is also a member of the Technical Committee of the Polish Committee for Standardization No. 274 „Concrete”.

He has made major contribution to publishing of the Polish scientific journals released by PAN (Polish Academy of Sciences), SIGMA-NOT (Federation of Scientific and Technical Associations – Chief Technical Organization), and ITB (Building Research Institute). He was a reviewer for many foreign publishing houses, including Elsevier, MDPI, Springer and others.

While conducting his scientific activities, Professor Lech Czarnecki has been fully engaged in the academic life as an dedicated tutor and lecturer. Repeatedly, he has supervised or reviewed distinguished doctoral, post-doctoral dissertations, as well as promotion applications for the Professor title.

For his scientific and organizational activities, Professor Lech Czarnecki was awarded and honoured a number of times. He is the holder of  the Knight’s Cross of the Order of Polonia Restituta, the Medal of the National Education Commission, the Medal of the 100th Anniversary of Regaining Independence, and the Badge of Merit for Construction. He also received countless awards and distinctions by Polish scientific organizations and associations as well as many international, not to mention, the Owen Nutt award for distinguished service and leadership in the polymers in concrete, or International Award of Materials Engineering for Resources for eminent activities in new frontiers of building materials engineering.

Professor Lech Czarnecki is an extremely charismatic man, a successful scientist, academician and practitioner. The rich achievements and numerous merits are invaluable and cannot be overestimated for Polish science. It is an honour for the academic community of the Kielce University of Technology to confer the honorary doctorate upon Professor Lech Czarnecki.